As a woman in my early twenties, just as anyone, I’m always intentionally (and probably unintentionally too) seeking influence and inspiration in the world around me. Now reaching an age where I’m coming to know and understand who I am as I learn to stand more confidently and firmly in my beliefs and values, I often look to women further along in their journeys to help fuel and fill my mind with vision and aspiration for my own life. I think that whether we go out and seek inspiration purposefully or not, there will always be people in our lives, sung or unsung, who we admire and respect.

I wanted to write this blog post as personally, I’m really guilty of complaining about the lack of positive female role models in our modern day culture (particularly in the media) when really and truly, there’s an army of women out there who are changing and shaking the world in their own way everyday. I’ve realised, also, that we can’t rely on the mainstream media or anybody else to tell us who they are, where they come from, and what they’re doing. The phrase ‘changing the world‘ can sometimes seem like a bit of an empty marketing term, but I believe that changing the world will look, feel and appear like something different for everyone depending on your passions, field of work and realm of influence (and each echo of impact is significant no matter what field you may be yielding). I also love that my personal list of influential women will both lengthen and change as I grow up and see more and more women in the world around me pioneering.

Below are just a few women of influence that I want to highlight and tell you about.

Yoani Sanchez, 42, is a renowned and ground-breaking Cuban journalist, blogger, programmer, philologist and author from Havana who has used journalism and technology as a force for societal change within her country. Yoani created Generation Y (her famous blog available in 17 different languages) and gained worldwide recognition and multiple international awards for her critical and authentic portrayal of life in Cuba under its current government. In 2008, she was named as one of Time magazine’s top 100 influential people. Here’s why: Cuban law, as you may already know, limits freedom of expression, opinion, association, assembly, movement, and press. Without going into too much detail, the country holds many repressive cultural policies. Reports also claim that internet use is very restricted throughout Cuba and is under tight surveillance as access is only possible with government permission. Yoani, despite obstalces, created her blog “as a way to exercise civic duty of advocating for change on the island” and has challenged repressive laws by empowering Cubans to express themselves through the use of technology. She tells the Huffington Post:

“Young women (and men) have a responsibility to their country and their fellow citizens to hold their governments accountable and strive to be better citizens. I believe that journalism plays a crucial role in achieving this, and I encourage others to use it as a medium to enact social change. For those journalists working in closed societies, it is particularly difficult to do this but I know that courage will help you through the challenges that await.” 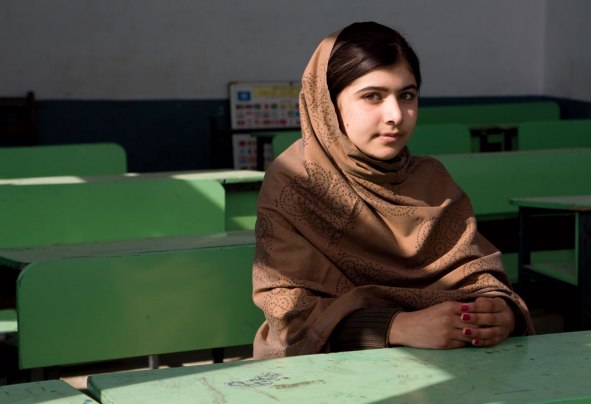 Malala Yousafzai is one of the world’s well-known and well-treasured activists. Born and raised in Mingora, Pakistan, Malala is the youngest-ever Nobel Prize laureate. She has been known for her human rights advocacy, especially for female education which began in her local community and has bloomed into an international movement. As a young girl, she became an advocate for girls’ education, which resulted in the Taliban issuing a death threat against her. On October 9, 2012, a masked gunman boarded her school bus and shot Malala whilst she was on her way home from school. She survived, and has since continued to speak out on the importance of education. Despite the Taliban’s threats, Yousafzai remains a devoted activist for the education of women worldwide. She has moved the world by her bravery, tenacity and commitment to the cause in which she stands for.

Heidi Baker is an author, speaker, minister and missionary (to name just a few of her titles). Based in Pemba, Mozambique, she is the founding director and CEO of Iris Global (a Christian humanitarian organisation). Heidi, alongside her husband Rolland, co-found, Stop For The One – an international sponsorship programme that works in areas of extreme poverty and hardship. Stop For The One feeds, clothes and loves over 10,000 children around the world. “When a child comes to live with us, they walk into a family. They are no longer orphans. They are instantly a son or daughter and a brother or sister in our Iris family”. Heidi has devoted 25 years of her life as a missionary and her heart’s greatest passion is to see revival amongst the poor and forgotten of the world. Heidi is a fearless and selfless woman of faith whose motivation is simple but eminently moving:

“We are trying to do one thing – we are trying to learn how to love. This is our job. It’s our only goal. This is what our work is about. It’s about incarnational love, and love looks like something.”

I recently read ‘Choosing the Hero: My Improbable Journey and the Rise of Africa’s First Woman President‘ by K. Riva Levinson. This book is a personal account of Johnson Sirleaf’s international consultant and lobbyist who helped her reach her victory. The book describes their joined efforts, struggles and gripping journey before finally winning presidency. I’d really recommend this book to anyone interested in public relations, politics and female leadership.

Ellen Johnson Sirleaf, internationally known as Africa’s “Iron Lady”, is the current president of Liberia. Serving a total of 12 years of presidency, Johnson Sirleaf was the first elected female head of state of an African nation. She has been named one of the world’s top ten leaders, and if that’s not impressive enough, she was also a freedom fighter, banker, UN bureaucrat and grandmother-in-chief. She made huge steps in ridding her country of warlords, rape and child soldiers. She was a strong and prominent advocate for equal rights for women and in 2011 received a Nobel Peace Prize for her efforts and for her non-violent struggle for the safety of women in Liberia. Despite being faced with the almost unconquerable challenge of building a country ravaged by civil war, she has worked hard to promote peace, reconciliation and social and economic development. To wrap up just a handful of her achievements, Johnson Sirleaf was also awarded the Presidential Medal of Freedom which is the United States’ highest civil award, for her personal courage and unwavering commitment to expanding freedom and improving the lives of people in Liberia and across Africa.

This summer I started to read Maya Angelou’s 7-part autobiography series, beginning with ‘I Know Why the Caged Bird Sings‘. From the very first page, I was captivated by her and quickly realised that I was both invested and gripped by her writing and the story of her life. Maya Angelou (1928 – 2014) was an accomplished and talented creative – an American poet, author and screenwriter. She was a strong woman of integrity – a civil rights activist who worked alongside Dr Martin Luther King and Malcom X. Her books center on the themes of identity, racism, family and travel. Some of her most famous work includes her 1971 poetry collection ‘Just Give Me a Cool Drink of Water ‘Fore I Die‘ and ‘On the pulse of morning‘  which she recited at Clinton’s inauguration and later went on to win a Grammy Award (best spoken word album) for the audio version of the poem. Maya’s life was surely not easy – she experienced firsthand racial discrimination, prejudice, poverty, teenage pregnancy and suffered at the hands of a family member around the age of seven when she was raped by her step father. Despite personal hardship, she still rose up to be (in my opinion) one the world’s most remarkable women. If you haven’t read any of her books/poetry yet, I totally recommend it.

About 3 years ago, at the end of a summer of working in France, my friends and I took a day trip to Nantes. Whilst exploring an antique store, I found a women’s French magazine from 1921 called ‘Madame’ (pictured below). I laughed to myself as I skim-read through the pages of advice columns and articles with titles like “how to tie your corset”  and “how to best iron your clothes”. This got me thinking about how the representation of women has changed and evolved over time along with our place and role in society, work and family-life which has also shifted, modernisned and (thank God) redefined. 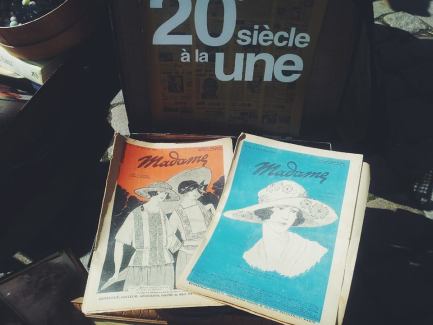 Getting a bit more to the point, in amongst a list of activists and humanitarians, you might be wondering why I’ve chosen to write about Chanel. Here’s why: Gabrielle Bonheur Chanel (1883 – 1971) as you’ll know, was a French fashion designer and businesswoman. What you may not know about her is that after her mother’s death, she was put in an orphanage by her father, who worked as a peddler. Gabrielle was raised by nuns, who actually taught her how to sew—a skill that would later lead her to her life’s work. In 1925, she revoltionised the fashion industry by introducing suits for women, borrowing elements of men’s wear and emphasising comfort (liberating women in a day and age of confining corsets and uncomfortable dresses). She broke the rules and disregarded the conventions of her time by boldly vocalising her way of thinking through her designs.

Being a woman in a male dominated world is one thing, however being a woman in the fashion industry, which was and is still today dominated by men who dress women, must be a huge challenge, which is why I think Chanel was a real revolutionary and pioneer of her time.

If you know me, you’ll know that I couldn’t write up about influential women without mentioning Alicia Keys. On a personal level, she’s my favourite artist and public figure, however her lyrics and passionate personality aren’t my sole reasons for including her in this piece. Alicia Augello Cook, professionally known as Alicia Keys, as you’ll already know is an American singer/songwriter from New York.  Though I’ve loved Key’s music and style since I was young (my dad used to play her songs to us when we were in primary school) she mainly captured my attention through her social and political consciousness, awareness and intelligence and her fierce feminist stance. If you know me (or have read my previous blog posts) you’ll also know that in 2015 I cut out makeup. When I found out about Keys’ ‘no make-up’ movement, I loved knowing that a woman in the public eye was inspiring women around the world to emrace their real selves (imperfections, rawness and all) and have been encouraged to know that there are so many women out there who share a similar perspective to me.

“I hope to God it’s a revolution. ‘Cause I don’t want to cover up anymore. Not my face, not my mind, not my soul, not my thoughts, not my dreams, not my struggles, not my emotional growth. Nothing.”

In a music and entertainment industry of hyper-sexualisation, superficialism and distorted beauty ideals, I believe Key’s is a force of authenticity, honesty and realism as she challenges and confronts the norms of popular culture. The above image shows her at Washington D.C’s Women’s March earlier this year where she was a key speaker. In May, she was also awarded Ambassador of Conscience 2017 from Amnesty International. When it comes to positive female role models, she’s definitely up there with the best.

Below is a link to her 100 Women interview with the BBC where she further explains her no make-up movement and heart for female empowerment: